Fifth Degree is a free MIDI sequencer iOS app developed for the 2014 KVR Developer Challenge. It does not make sound on its own. By default it sends MIDI notes on its own virtual interface; other apps can listen on that interface and play the notes. If you are new to MIDI or MIDI apps on iOS, you may wish to read this step-by-step tutorial before reading more about Fifth Degree itself. You can configure Fifth Degree to send MIDI notes to any additional physical and network MIDI interfaces. You can also synchronise timing between apps and other hardware by choosing where to send MIDI clock.

Fifth Degree aims to be a simple but playable source of MIDI notes for looping, jamming, experimenting but especially post-processing. Its underlying philosophy is that from a few simple elements complexity can arise. Flexibility is great and has its place, but sometimes it can be liberating to work to a set of constraints. The main constraint in Fifth Degree is that it sends out a fixed sequence of MIDI notes, stepping through the circle of fifths in the key and mode / scale you choose.

Fifth Degree keeps the essential performance controls on the main screen. The main element of the app is a circular display of the twelve notes in an octave, arranged clockwise in ascending fifths. Only seven notes are in-key. They are displayed in decreasing brightness with the root note for the key being the brightest. Depending on the mode / scale you have selected, the root note is not necessarily the first note in the coloured arc of in-key notes. You choose the key to play in by tapping on the segment containing the root note, and you can choose from a list of classical modes to slightly change the feel of the sequence. 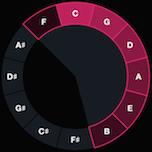 The other essential performance controls are:

You can further configure Fifth Degree using the Settings view:

Fifth Degree will continue to send MIDI notes if it is sent to the background while playing. This allows you to tweak the performance controls of your sound generating apps while it is running and sending them notes. Note that apps vary in their own support for running in the background and interoperability with other backgrounded apps.

Here are some solutions to possible problems you may encounter using Fifth Degree. In particular, interoperability between iOS apps is relatively new territory.

You can post any further support questions in the Fifth Degree thread on the KVR DC Chat forum.